The end of 2017 saw a victory for former star footballer, George Weah. A victory that saw him become President-elect of Liberia, in the first election since the end of the Second Civil War (2003) to be run completely by the country’s institutions, without assistance from the United Nations.

Born in the Clara Town slum of Monrovia, in 1966, Weah briefly worked as a switchboard technician before he rose to fame on the football pitch, joining his first football club at the age of 15 and not long afterwards, playing for teams across Africa and then Europe.

Appearing on the global scene as a gifted striker signed by Arsene Wenger at Monaco, he later went on to play for PSG, AC Milan, Chelsea and Manchester City.

Weah, the founder of the Coalition for Democratic Change (CDC), really has led a life of firsts. He is the first, and only, African player to have received the FIFA World Player of the Year award, the Ballon d’Or, and as he takes office, he becomes the first World Football Player of the Year to become a country’s president.

“The life of this guy is a real film. It is unbelievable. It can make a fantastic film,” said Arsene Wenger in an interview with BBC Sport.

Now regarded as one of the greatest footballers to never have had the opportunity to play in the World Cup, Weah retired gracefully from the sport in 2003, aged 37. He then proceeded to pursue a career in politics.

This career suffered a loss in its infancy when, in the General Election of 2005, he ran for president for the first time and lost to Ellen Johnson Sirleaf, whom he has now succeeded. His lack of experience and formal education became points of contention when he came up against his Harvard-educated opponent.

Later, in 2011, he ran for the vice-presidential position and lost to Joseph Boakai. However, he did not let these setbacks dissuade him from his mission: to build a better country.

George Weah’s humanitarian views have earned him global recognition. Using his sporting fame as a platform to benefit his people, he has received the Arthur Ashe Courage Award, and has been named Goodwill Ambassador for both the UN and UNICEF. 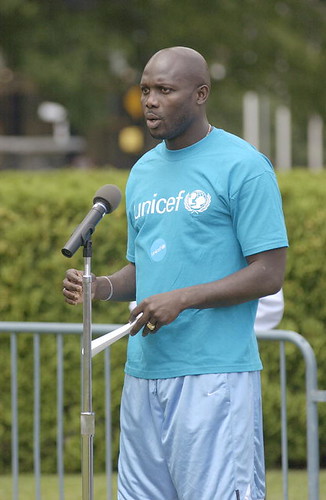 A strong believer in the power sport has to change the lives of future generations, Liberia’s new President has dedicated millions to the building of football academies in Liberia and India, through a partnership with entrepreneur Nirav Triphathi. He also founded the Junior Professionals team in Monrovia in 1994, which unfortunately is no longer in operation. The only requirement for Junior Professionals membership was school attendance, a useful incentive to keep the country’s youth in education.

Weah has a strong stance on political ethics; in a 2010 interview for The Liberian Journal, he vowed to recuse himself from politics if he ever engaged in bribery. He has also stated in an interview with Deustche Welle that he believes in gender equality, and that it was a ‘good thing’ having Jewel Howard Taylor as his running mate in the 2017 elections (the senator is now set to be his vice-president).

The 2017 elections saw George Weah win the Liberian presidency with 61.5% of the votes in his favour, beating vice-president Boakai. Critics say that he is still much less qualified than his predecessor, Sirleaf. There is also disapproval of his choosing of Jewel Howard Taylor as his second-in-command, due to her previous marriage to convicted war criminal Charles Taylor and her proposed 2012 legislation that would have made homosexuality a first-degree felony in Liberia. However, this controversy was not enough to stop Weah from winning the presidency in December.

As President George Weah officially rises to power as Head of State, we hope that the star footballer will, as he has done throughout his life, reach new heights for his beloved country, Liberia.